The Club was founded in 1889 and its magnificent Club House was designed by famed New York architect Francis H. Kimball, inspired by a palace on Venice’s Grand Canal. The Club House was completed in 1891 and its Venetian gothic architecture, carved mahogany woodwork, and beautiful stained glass windows remain its signature features. Originally founded as a men’s club, it was also heavily used by women for breakfasts, teas, luncheons, bridal showers, and other events. Despite its inception as an organization of wealthy White males of a ‘certain social standing’, the Montauk Club was considered to be downright radical in admitting Protestants, Catholics, and Jews, as well as Democrats and Republicans from the start. Members even ran against each other for Mayor of the City of Brooklyn twice over its first ten years!

Today, the Club is a vibrant part of its Park Slope, Brooklyn neighborhood. Members organize a variety of events year-round, including monthly book, beer, and wine clubs that are popular with a cross-section of the membership.

We continue to honor the spirit in which the club was founded by striving to be an open, inclusive place for people of goodwill to gather and socialize.

The Montauk Club is an incorporated entity organized to promote social relations among its members, to provide a "suitable Club House as place of resort and entertainment, and to establish there-in a library and collection of works of art for their improvement." The By-Laws were last modified March 27, 2019 by the Board of Directors.  Click here for a copy of the By-Laws. 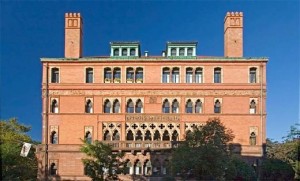